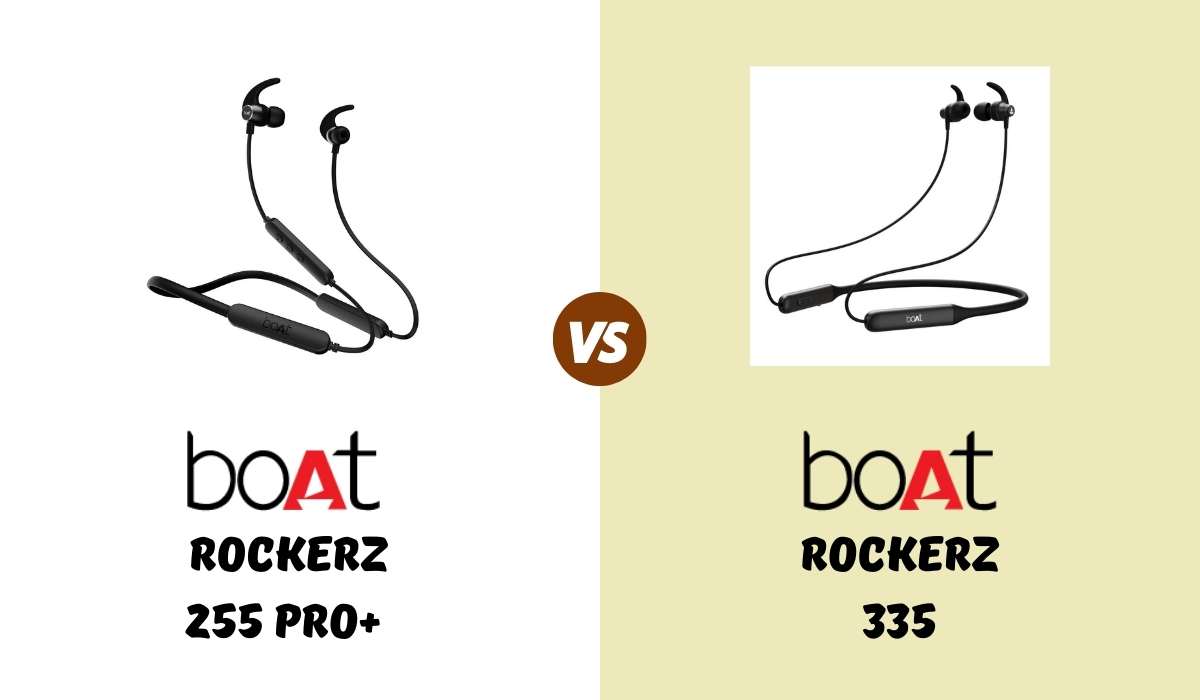 For all the boat heads out there, we decided to compare and clear the confusion between two very similar which is boAt Rockerz 255 pro+ vs boAt Rockerz 335

Now both of these earphones are wireless neckbands which means it is important to look beyond sound quality, comfort, and design and explore other important aspects like battery life and connectivity. Before moving on to our comparison parameters, I want all my readers to become a little more educated about headphones and the audio industry. Do check out best gaming headphones under 2000 or 3000 if you are into gaming.

When talking about Bluetooth-enabled or wireless earphones and earbuds it is important to keep in mind that the real-world performance of these earphones should be judged in a slightly different manner from the wired ones.

Look, while using a wired headset in real life, the sound clarity, audio output, and stereo separation for the same headset differ from device to device depending upon the power output given by the host device. You must have noticed that your wired earphones provide a better output when used with a PC as compared to a mobile or tablet. That’s because the 3.5mm audio jack on laptops and PCs supplies more power to your wired headset.

When talking about wireless earphones and headsets, no such difference is seen which means the sound quality solely depends on your earphones and not the host device. This also means that you will get a much more consistent audio output from wireless headsets as compared to wired ones. This is because wired headsets are dependent on the host device for power while wireless earphones come with their battery and thus a fixed power input.

Now that this article has increased your knowledge about the working of earphones, let’s move on to our topic for the day: boAt rockerz 255 pro+ vs 335.

Both the headsets are very similarly priced with 335 selling on amazon at 1599 bucks and 255pro+ selling at 1499 bucks as of writing this article. A significant discount of upto 200 rupees is seen during sales for both the headsets.

As mentioned before, both the earphones are offered by boat which means both of them are going to have a lot of similarities. Both headsets have their bodies made up of silicon and the earbuds are made up of metal. However, the metal used in 335 is heavier and feels premium which gives it a slight edge over 255pro+. The quality of metal used in 255 pro+ is also good but the overall construction of silicon as well as metal in 335 is much more durable relatively.

Both earphones have a shark fin(silicon-made curve) mounted on the buds for better grip in the ear and I enjoy the noise isolation that these earphones provide after putting them in ears but again, because 335 have heavier earbuds they provide slightly better isolation.

The style statement on both the headsets is the same – typical youth appealing cool style of boAt with quirky colors and minimalistic design. 255pro+ comes in exciting IPL themed colors like csk blue, rcb black, and kkr thunder purple.

Both the earphones are equipped with Bluetooth version 5.0 and not the higher versions like 5.1 or even 5.2 but considering the price, I didn’t feel any stutter on either of them. Talking about latency, no significant lags were noticed but with BT 5.0, high-end gaming for FPS games is not possible.

The range on 255pro+ is better than that of 335 by a mile. Officially, both earphones have an uninterrupted range of 10m but 335 starts losing connection even if a single wall separates the neckband from the host device. 255pro+ performs slightly better in terms of range and stable connection over a distance.

255pro+ is also equipped with QUALCOMM’s aptX codec which will be used only if your Smartphone has the same codec and even if it does, it makes no difference at all. 335 on the other side is equipped with QUALCOMM’s aptX HD codec which again, will only work if your host device supports that codec. In my testing, no significant difference was noticed in the performance because of these codecs.

The most important thing to keep in mind while talking about sound quality is that both of these neckbands share the same signature sound profile as they both are tuned by boAt in the same price segment. Both the headsets are equipped with 10mm drivers of similar quality. Digging deep into the real-world experience, the bass on 255pro+ is better as compared to 335. The former has a good enough thumpy bass with a heavy sound signature while the latter has weak bass with a flat sound profile.

Treble on 335 is better but as the volume is increased over 70%, treble turns into noise and ruins the already weak bass making it impossible to enjoy music at high volume. Even the vocals on 335 become muddy at high volumes. 255pro+, on the other hand, has balanced treble and vocals but nothing exceptional which when paired with its heavy bass becomes a great deal at this price.

Stereo separation on both earphones is very similar and fails to create an immersive surround sound experience which is acceptable at this price. However, boAt claims to have equipped 255pro+ with active noise cancellation which in my opinion is a gimmick as no sound suppression is seen in either of these headsets.

Sound is a very important aspect and as much as I know about Indian consumers, they love bass or should I say “baby ko bass pasand hai” and therefore 255pro+ is a clear winner in this segment.

Both the neckbands are equipped with Qualcomm’s CVC technology which yet again makes no difference at all. In indoor conditions, both microphones pick up the voice loud and clear without any hesitation or background noise but as we move to outdoor conditions, 335 is defeated by its sibling again.

The microphone on 335 picks up more background noise than your voice in outdoor conditions and makes it very difficult to take a call while riding a bike or even walking on a busy road. 255pro+ on the other hand performs way better and you can comfortably use it to take calls even while riding a bike.

It takes about 45 minutes to fully charge 335 while about 1 hour to fully charge 255pro+. Overall, both headsets have a great battery backup and you won’t have to plug them in very often even with heavy usage.

In my verdict, I found 255pro+ a better alternative as compared to 335 because of its better sound profile and better microphone than 335. In aspects such as battery backup, noise cancellation, and connectivity, both the neckbands are literally in a neck-to-neck competition.

We at GadgetDekho provides our users the most unbiased and genuine review about the gadgets available online like headphones, earphones, earbuds etc.